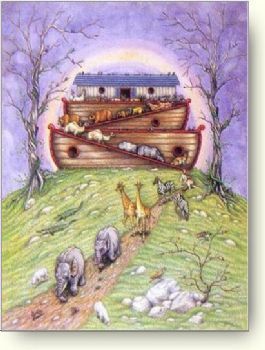 Everything I need to know, I learned from Noah's Ark..
ONE: Don't miss the boat.
TWO: Remember that we are all in the same boat.
THREE: Plan ahead. It wasn't raining when Noah built the Ark.
FOUR: Stay fit. When you're 60 years old, someone may ask you to do something really big.
FIVE: Don't listen to critics; just get on with the job that needs to be done.
SIX: Build your future on high ground.
SEVEN: For safety's sake, travel in pairs.
EIGHT: Speed isn't always an advantage. The snails were on board with the cheetahs.
NINE: When you're stressed, float awhile.
TEN: Remember, the Ark was built by amateurs; the Titanic by professionals.
ELEVEN: No matter the storm, when you are with God, there's always a rainbow waiting.


I THOUGHT THIS HAD A LOT OF GOOD ADVICE IN IT.