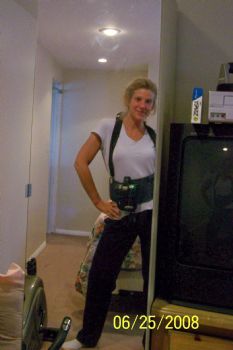 My impression of the Bionic Woman!! I am Sexy Trend Setter, I know it! Haha

Today I had a Capsule Endoscopy (My Photo Shoot, as Cherrydoll called it). This technology allows for viewing of the small intestine previously only seen by surgery. The Capsule is a small camera about the size of a big vitamin. It emits an LED light and takes two (2) pictures per second as it travels through the gastrointestinal tract. The pill was easy to swallow, and I had about 10 electrodes hooked up on my abdomen (like an EKG hook up) and the back pack you see in the pic holds the computer. These images are then downloaded to a computer and my doc will view the footage.

It does NOT replace Colonoscopy or Upper Endoscopy because the capsule cannot be controlled as to what it is viewing, nor does it provide the ability to take biopsies but, it does provide the ability to view the small intestine beyond the reach of the standard colonoscopy. The Capsule can examine the entire length, (approximately 20-30 feet) of the small bowel. Since my doc has already confirmed the reoccurence of my Crohns via colonoscopy, this test will show if there are any other areas he should be concerned with, and may be able to account for any other reasons concerning my anemias.

There is very little risk with this procedure; however if there is a blockage or narrowing in the small intestine, the capsule could become stuck at that site and require surgical removal. So, the immediate good news is that it came out, which means there are No Horrible Strictures! WooHoo! I am sure they will view the footage within the week and let me know what is what.

I called the doc at 1:45pm and I told him I pooped out the camera already (and NO, I did Not have to retrieve it).
He said "Are you sure? How do you know?"
I said "Yes, because my poop was blinking."
He said "And you have Never had blinking poop before?"
I said "No, although my surgeon thinks sunshine comes out my butt."
He laughed and told me to come on down and return the equipment.
He still didn't believe me and asked if I actually saw the camera because that is a very fast rate of digestion. So, I apparently digest at least 2-24 hours faster than "normal" people. I KNOW I am NOT "NORMAL", besides what's the fun in that???

I have to say the experience was surreal, like out of a science fiction novel. And if blinking poop wasn't weird enough. The weirdest part was the swallowing of the camera to begin with. It was blinking and it was strange to think that it was gonna be inside me. I wish I could get a copy of the footage, I just think it is fascinating.
Share This Post With Others
Report Inappropriate Blog
Member Comments About This Blog Post