A few months ago at our monthly card club meeting (aka gab fest) a couple of friends and I started questioning whether we could do a triathlon or not. One of the woman's daughter was challenging her to do it with her. Ummm, no, her mom was not an athletic woman and would not ever do that! After a couple of margaritas another friend and I started challenging her to start running adding that I would swim and the third would bike so we could do a relay triathlon! Lots of egging on from the others and next thing we knew we were signing up for the spring relay triathlon that happened this morning! We worked hard at our sport, trained and became more nervous each week. This morning we hit the road at 4:15 A.M. to drive to the site and get ready. I didn't want to drown, Sue didn't want to fly off her bike hitting potholes on the road, and Mary didn't want to "get lost and run 10 miles instead of 3.2". Surprise.......... we all survived!
Well, what do you know!!!! Not only did I survive my swim portion of the triathlon this morning I'd say I (and the team) did very well! We were all very nervous but as each of us took our leg and let muscle memory from our training take over everything went smoothly. My swim was great and all my fears of elbows, feet, and hands everywhere on me wasn't bad at all. I'm afraid I might have been the one to inflict such torture however, as I started too far back in the stream and got caught in a pile of slower swimmers. I had to find openings to pass quite a few people. (No apologies on my part - it felt good heehee) I was surprised with my time when it came up as I finished the .4 mile swim, the ladder climb, and run to the transition area in 10 minutes 31 seconds. This was a lot faster than I imagined. My friend who biked moved much quicker than she thought she would and our friend the runner finished her leg at a great pace as well. At the end we finished 4th place out of all the relay teams at our length. The best part was that the 3 ahead of us were either all men or co-ed teams! Ours? 3 grannies aged 57, 60 and 63!!!!
Point is.......... you never know what you are capable of doing if you don't try! It might be scary. You might be terrified to let anyone see you with your big belly in a swimsuit as you get ready to jump in the lake. You might think you could never be able to run over 3 miles. You might think you could never spend that amount of time preparing for something so daunting. You might think you won't be able to eat properly to have the energy to do a race. You might think.......... However.......... you might just find yourself thinking, OH YEAH, I can do that! You might just be right! 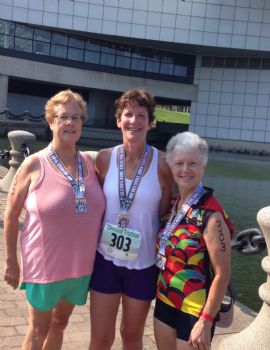