Sensual Chair Class photo and what's going on with me :)

Hey y'all! I've not been on SP much lately... I'm using my FitBit app, mostly. It's been working pretty well for me. I've lost about ten pounds since I started back to school in August.

Good news! I started a new job! I got the news about the new job back in June. I work at a primary school, and I teach 4K, 5K and 1st grade all day long. It's exhausting but great for weight loss, lol! It's a wonderful job. So far I'm loving it.

The bad news is that my father passed away back in June as well. Honestly, once that happened, I felt better. Watching him wither away from colorectal cancer for the past couple of years sent me into a tailspin. It affected me much more than I thought it would. We had been estranged for many years, but began speaking again before he got his diagnosis about two years ago. It happened that way for a reason, I know it. I got to say goodbye to him. It was a horrible death, though. I had never seen someone so emaciated and suffering. It was a terrible sight that I hope these eyes never have to see again.

I'm still about twenty pounds heavier than my previous weight loss, which sucks, but I still feel proud of myself for having lost more than 60 pounds and not regaining that weight. I've kept it off for four years, through pregnancy, loss of a family member, sickness of a family member (my mother), and that is saying a lot! It requires a lot of mental focus to keep from regaining when you have lots of tough things happening in your life. The old me just wants to go to bed with a pound of Reese's cups and cuddle with my blanky. Because, to me, that is the way that I comfort myself during times of stress. I wish I could stop that person from taking over, but I still haven't overcome her. I don't know if I ever will, but I do keep fighting it as much as I can.

My little girl is adorable and a little stinker. She's 2 now. Halloween was a ball for us! She was Elsa at a festival about two weeks before Halloween, and ruined her costume (ripped it, etc) so for Halloween we just doused her with fake blood and had her be "Zombie Elsa." It was hilarious. So fun! I can't wait for Christmas. I am waiting to put up the tree. It's just so fun seeing how excited she gets over holidays! It's so much more fun decorating now that she understands what things are and can talk about them.

And lately I've been doing my "30 Day Shred" video at home and Tabby (my lil) does it with me. It's so funny. I should record it. She does the squats, and when I pick up my weights, she picks up her toy microphone and curls it like Mommy does. She even gets on the floor and does some sort of pushup-like movement (ha). It really is a hoot. The worst thing is when she gets bored and tries to sit on my back while I'm doing them. I can barely do them at all, much less with a 30-lb toddler on my back!

Another cool thing I did lately was the Sensual Chair Dance class I took at the Pole-Dancing Centre. Ha! I feel so scandalous having done it! It's another one of my "getting-out-of-my-comfort-zon
e" activities. I'm trying to do things that scare me! It was so funny. It was done right before Halloween so we all had to wear costumes. Most of us didn't come dressed, so the teacher had this grab bag full of costume accessories for us to choose from. I chose the red feather boa, so that's what I'm wearing in the photo. I'm in the back. 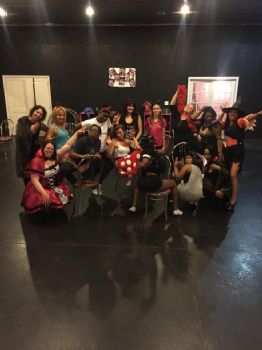 300 pound me could not imagine that I would ever take a class like that! I'm starting to realize that it's not about weight anymore, it's about being awesome in all things. It's about being fabulous, and facing your fears, and having fun, and not caring what people THINK! That comes with age mostly, I think. Life is starting to fit together nicely.
Share This Post With Others
Report Inappropriate Blog
Member Comments About This Blog Post