I've been doing WW since Feb 22nd. I had tried WW before back in 06 or 07 with great success until I stopped doing it. The new program is much different, but I feel like it's easier with technology on my side. No more point slider or carrying a book around with me to figure out how many points something is. The app is amazing! It's not 100% accurate all of the time, but with some diligent double checking I think I've been tracking as accurately as I can. 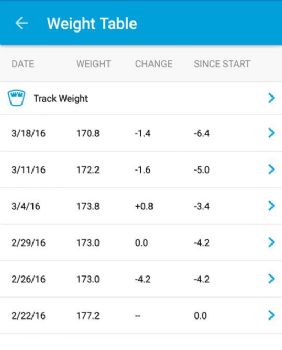 I've had one minor setback since I've started. Even this week, I started off pretty bad. I had a bad day. On the way to lunch I got a flat tire which couldn't be repaired after just buying two other tires a few days prior. My lower back was injured while I was trying to change my tire and things at work were more stressful than usual. I let all of that get to me. When my husband suggested that we go to Golden Corral, I said yes. Yes, I know there are actually plenty of healthy choices I could have made there. I didn't. In that sort of environment, I don't have that much self control. We were staring at a chocolate fountain the entire meal!

After we got home, I felt awful. My body was regretting the pile of fried foods and sweets I gave it when it had just gotten used to eating clean and healthy. I listened to my body and decided to let this day slide by. I wouldn't let this "setback" actually hold me back.

The rest of the week I went right back to eating healthier. I tried to avoid using my weekly points to compensate for my splurge on Monday. I typically weigh myself on Fridays, but this past week I decided to weigh myself on Monday (morning) just to see. Today, I weigh the same amount as I did Monday morning which means that I managed to maintain my weight through my splurge. I'll take that as a win!!