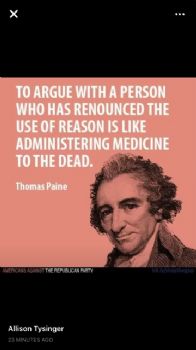 Making changes, for me, doesn't often begin with shame or disgust. There are times I've looked at some area of my life and thought "oh, Hell no, this is not acceptable" but unless my disappointment in myself or dismay at a particular situation is then followed by the unmistakable spark of willingness and resolve, I'm not likely to truly change. I've been lingering in a state of unwillingness about excess food and weight for awhile now. This is nothing new. I accept that I tend to be cyclical in this particular area. I also accept that when I do get some willingness I grab hold of it and use the energy and momentum it grants me, to propel myself out of a rut or a funk. I've been indulging my propensity to argue and debate politics and social issues. I do this on-line, via Facebook. I know there are a lot of people who (a) hate Facebook and (b) hate arguing politics. I'm not one of them but I am at a point where I need to pull back. I am a scrappy Irish blooded woman who is never at a loss for an argument or a sassy comeback which is all well and good except for the person on the opposite side from me who insists on making racist, ignorant, vulgar comments in which case I will piss them off because I find it so hard to back down from a fight with someone I perceive to be a bully. If someone counters with a good point in a respectful fashion, I can and do consider other viewpoints but more often it is just people hurling insults at me, which I very seldom take personally because insults from people I don't respect are not wounding to me. I know this all sounds crazy but bear with me. I've learned some things while indulging my scrappiness and engaging in on-line parrying. I accept that I'll always be someone who chooses not to stay silent when cruelty and verbal abuse goes on because I think silence is complicity or implies approval and, for a number of reasons, I can't abide passivity. On the other hand I don't have to seek out arguments, I don't have to attend every fight I'm invited to, I don't have to have the last word, and - this is the hardest one for me - I don't have to defend everyone else, especially when they don't need me to, haven't asked me to, and in some cases would really rather I stay out of it. So what the hell does all this have to do with weight loss, you ask? Well, it's become clear to me that I need to pull back a bit from Facebook and arguing politics, etc. and that it's time to spend more on-line time in the warm and encouraging land of Sparkpeople once again. It's time I channel my fighting Irish spirit to fighting for a more comfortable body to inhabit, to argue with my cravings and compulsions rather than on-line armed racists, and to use my urge to write every day to blog about my struggles and triumphs and to track my nutrition and exercise. So, I'm here and I'm ready, WILLING, and able.
Share This Post With Others
Report Inappropriate Blog
Member Comments About This Blog Post