Today I ran the longer that I've run in the last five years. Five miles without stopping. I didn't intend to do it. I planned to walk/run the whole way, but I felt good when I started out. Better than good. I felt ready to do 5K without stopping, which I haven't done since I took my May/June break from the whole workout thing. So I decided to run 3 miles, then run/walk the last two. But something happened on that last mile.

Someone who had seen me go round the loop once already, while passing me for the second time, took the time to say "You're doing great." Like a cheerleader at the crossroads in a race, he buoyed me up, and I didn't want to do just what I had done before. I still felt good, and I had already trained for the distance, so I decided to run one more mile. To practice through my body's desire to quit after crossing that imaginary 5K finish line that muscle memory says means the race is over.

And that 17 minutes between mile 3 and 4 was awful. I started to chafe in my unmentionables because I'd neglected my Body Glide, and my left foot started to hurt a bit. Like I'd tied my laces too tight. Or too loose. Or just like my body wanted an excuse to quit.

Daughter did quit. She blamed chafing. But I gave her the car keys and told her I would meet her back at it in a few. I would make it to mile 4 THEN I would take a walk break. Only as Map My Run was announcing my time and mileage, a shirtless runner who has much, much faster than me, slowed down enough to make eye contact as he past me and said "Lookin' really good!" The pain in my left foot evaporated like it had all been in my head in the first place. And I decided what damage the chafing had done would not be aggravated too much more by running vs. walking the last mile.

So the moral of this story is if you see someone out there giving 110%, especially someone for whom the effort looks anything but effortless, let those kudos fly. Your words might inspire them to greatness. Or at least to one more mile!

And PS. My Super Turtle is now on a tank top! 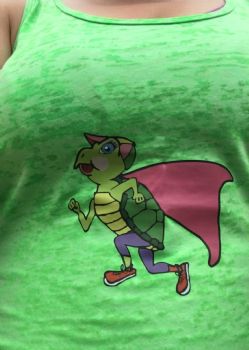