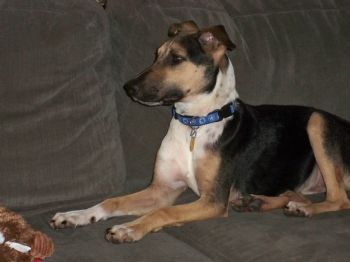 I'd like to introduce Makua (pronounced Ma koo ah). He is a true rescue, or as my friend put it, a foundling.

My son and his girlfriend were out one night in a remote area of the island when they found this little dog. His girlfriend got the dog to come to her with a sandwich, and he was so timid and scared, she didn't want to leave him. I get a phone call at about 11:00 pm;
me: "Hello, Jacob. What's up?"
son: "We stay Makua Cave an' Maddie found a dog. She doesn't want to leave it here."
me: (Pause) "How big is it?"
son: "Not big, I think it's a puppy."
me: (Pause and sigh) " Bring it home, we'll figure out what to do."
The "Pause and sigh" was because I really don't want to deal with a puppy, but if they thought it was a pup, I really couldn't tell them no. So I wait for them, praying they make it back before too long, so if I need to run into Kapolei for supplies, I can still get to bed before 2 am. When I see the dog, I thought, "Oh, someone shrunk a German Shepherd!" We get him inside and I can tell that he is an intact male, and from his teeth, he must be at least a year old. Yeah, not a puppy, I don't have to rush out to get anything, it can wait until tomorrow. I clean out Pebbles' crate (It had been sitting outside in the elements since she passed), and we get the little guy some water and something to eat. (The meat from a couple of fried chicken thighs.) I dug up the shampoo we used on Pebbles, and had Jake and Maddie give the little guy a bath, with instructions to do a good inspection for ticks. They bring him down after two lathering, report no ticks found, and no sign of fleas either. he is still shivering, so I get a fresh towel and start rubbing. He just melted into my arms. The look on his face said it all, and I was lost.

I posted his picture on a couple of local Facebook pages, and we took him to the vet the next day to see if he was chipped and to file a Found Dog Report with the Humane Society. No chip (really didn't expect one) so we headed home. I didn't want to commit to keeping the little guy until I talked to my parents. My dad sat down next to him, and Makua crawled into his lap, demanding to be pet. Deal sealed. I turned him into the Hawaiian Humane Society under their "Finder Wants" policy. Since he was unchipped, they hold him for 48 hours, then prepare him for adoption (health exam, vaccinations, de-worming, and neutering). They were supposed to call me when he was ready. I dropped him off Monday evening, (I cried as I promised him we would be back for him) and I hadn't heard anything by Friday, so I was a little worried. I called Saturday, and was told some one would call us back. I was getting even more worried when the call came just before 2pm. We got there and when he saw us, pure joy! I just love having him, and he is so different from my Pebbles, I can enjoy him with out feeling like I am torn.

I feel that God puts thing in our path at the right time, whether we realize it or not, and he knew we were ready for the right dog, and Makua just wanted to love and be love.
Share This Post With Others
Report Inappropriate Blog
Member Comments About This Blog Post