The Mud and the Ruts

Over the summer Scott and I took a day-long class that taught us how to drive a Model T Ford. It was an absolute blast. By the end of the day we were literally driving 90-to-100-year-old cars around the grounds of the Western Antique Aeroplane and Automobile Museum. We even ran out of gas on our last trip! 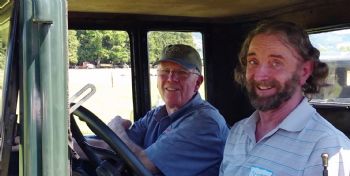 One of the things we discovered about those old cars was that those suckers could go almost anywhere. Places we would never take our modern vehicles could be negotiated without batting an eye. We drove one of our cars down a grassy slope and yes, we got bounced to kingdom come, but the car didn't flip over or slide, it just chugged along. We watched a video of a car driving through the mud and ruts and all sorts of nonsense, and were amazed by how these old cars took it all in stride. They had to - there were no real roads back then, and if you had a car you had to be willing to just go and see what happened.

This morning as I pondered the difference between a routine and a rut, I thought of those Model Ts bouncing along. Hit a rut? Drive through it. Get stuck? Shove off and move on. Was it pretty? Nope. Was it fun? It looks like fun, but think about the bouncing, the getting covered in mud, the times you know that they really got stuck and had to dig out. That could not have been any fun.

But what I liked the most was the fearlessness. The sense of adventure. The acceptance that there would be ruts and mud and obstacles, but, by cracky, we are going for a drive!

I want to embody that spirit in my journey back to health.

Is it going to be ugly at times? Yep.

Will there be times that I hit a rut? Indeed there will. My job will be to keep on moving forward, sticking an arm out to push off from the side of the rut sometimes, but move it, move it, move it.

Will it take hard work? You better believe it!

But in the end, regardless of how long it takes, or how exhausting the journey is, reaching my destination will be worth some mud and ruts.