Day 388: I haven't posted anything since September, so here goes!

If anyone read my home page about why I started this mission to lose weight, they would know that I had a trip to Africa planned. Well we went to Africa in November and it was wonderful! I also had a 28 day trip from Texas to Yellowstone and on up to Glacier National Park in Montana during almost the entire month of September. We left on August 31st and were gone 28 days. My last blog was on Sept 22nd (during that trip) and I hadn't weighed but was expecting a weight gain since I ate whatever I wanted to on the trip and didn't track anything except my walking (which ended up at about 85 miles during the trip.) When I got home, I found that I had gained 5 pounds. So I went from 185 to 190. I figured that I'd take it off during the month of October before we left on our trip to Africa, but I didn't. Of course it was my own fault since I didn't try all that hard. I also didn't exercise. I only took off 2 pounds that month. (Down to 188.)

We left for Africa on November 7th and stayed 2 nights in Amsterdam along the way, since our plane had a stop there and we hadn't been there before. We packed clothes for 80 degree Africa weather and arrived in 28 degree Amsterdam weather. My heaviest clothes were a long-sleeve button-up cotton shirt and a thin rain jacket. Of course I was freezing and it was drizzling. After arriving mid-morning, we took our hotel shuttle to check in and to drop off our luggage. I only added a scarf to my outfit because it had warmed up to 40 degrees (but should have added more clothing.) Then we took the hotel shuttle back to the airport and took the train to Amsterdam Central. You can get almost anywhere from either the airport or Amsterdam Central so we took a trolley to stop closest to the Van Gogh museum. It was awesome! Afterwards, we took a trolley back to Amsterdam Central and walked around Old Town. We had dinner in Old Town and headed back to our hotel to get some sleep, since Amsterdam is 7 hours later. The next day, I wore 4 shirts and my rain jacket and scarf, so I was much warmer. The temperature was still about 40 degrees and it was still raining (a little harder today, but not too bad.) We visited the Anne Frank house, did a canal tour, and did a Hop-on/Hop-off red bus tour. We used the bus tour to get close to the Anne Frank house, so we didn't have to do another trolley. We stayed in town late that day (after dark) and had a great time.

The next morning, we took the hotel shuttle back to the airport and left on our plane to Kilimanjaro. We arrived late at night and were greeted by our guide who drove us to Lake Duluti Hotel in Arusha. (A gorgeous hotel by the way). The next morning we drove to Tarangire National Park and immediately started seeing wildlife. (Elephants, giraffes, zebras, wildebeests, cape buffaloes, eagles, impalas, exotic birds, etc.) This is the first photo I took in Tarangire NP. 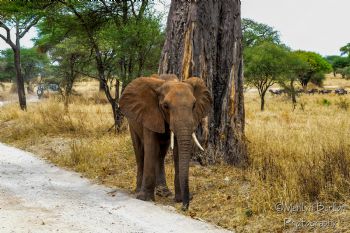 That same evening, we went on a Night Game Drive where the driver had a spot light to shine to try to find animals at night. When they are looking our way, their eyes shine bright and we could spot them. We saw jackals, bat-eared foxes, hyenas, bush babies, and a Civet.

The next morning was a Walking Game Drive and we were close to zebras, cape buffaloes, giraffes, and elephants. Our afternoon game drive was spend looking for animals in the Tarangire again. We saw the same animals as the day before and also ostriches, Secretarybirds, Dik-diks, Egyptian Vulture (somewhat rare to find), and more.

I won't continue to describe each individual day, but during the rest of the trip we did a hike to the Elephant Caves near Gibb's Farm (which is near Karatu, Tanzania), a visit to a Maasai village, an Iraqw village, a local hospital, a local primary school, a hot air balloon ride (over the Serengeti), Oldupai Gorge (where Mary Leakey found the earliest discovered hominid, Lucy), and lots and lots of game drives in the Serengeti, the Tarangire, and Ngorongoro Crater. We saw a whole lot of lions (over 35) - (and saw two different pairs mating), we saw TEN leopards (most people don't even see one), 11 hyenas, 2 cheetahs, baboons, hippos, crocodiles, ostriches, zebras, wildebeest, warthogs, hartebeests, mongooses, hyraxes, elands, waterbucks, reed bucks, gazelles, topis, klipspringers, and over 90 species of exotic birds.) We also saw a lion pride that had just killed a cape buffalo and were eating. And 2 female lions who had just killed a zebra and was eating it. We saw a zebra kill (from a leopard) in a tree, and a leopard eating a wart hog in a tree, as well as a male and female breeding pair of leopards in a tree.

The leopard pictured below was first seen in a tree, but it got up and leaped out of the tree (and yes, I got a photo of that!) and then it walked over to a nearby pond and started to drink. 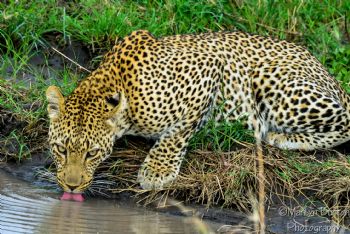 During the trip, all meals were included and we were given a few choices for each course. I gained 7 pounds during the trip! So I was up 10 pounds at that point! That's what happens when you eat wonderful meals and ride around in a Land Cruiser all day. My only exercise was the hike to the Elephant Caves and the Walking Game Drive. So I was at 195 at the end of the trip. However, I was able to do the hard uphill hike that I wanted to do as it was near the beginning of the trip. (although it was still hard and everyone in our group said we would never do it again.)

When I got home, I found out that my doctor was no longer going to carry my insurance so I called and since I'm turning 65 in August, we decided that I would come in after Christmas and get my lab work done and he would be OK with waiting to see me again until August. So I don't have to change doctors. While I was there, he decided to start me on a medicine which might cause a temporary weight gain! So I put on another 8 pounds quickly! That put me up to 203! The only good news is that I was able to maintain my 195 during Thanksgiving and Christmas!

After all of that, I tried to start my old Spark People diet but failed every single day. I didn't fail bad enough to gain more weight, but I was eating too much food and wasn't losing anything, so I decide to try a low-car diet 2 weeks ago. Thankfully, my hunger has been reduced and I've lost 4 pounds since then, so I'm down to 199. I still have 14 pounds to go to get back to my pre-Yellowstone and Africa weight. After that, I need to lose at least 10 more (maybe 20!). I'll see how I look and feel. I may even go further than that. Even though I'm on a LCHF diet, I'm still staying under 1300 calories per day. I also try to do intermittent fasting which entails either eating 500 calories for 2 days a week (I'm not doing this), or waiting 16 hours between dinner and my next meal 2 or more times per week. On the days that I do that, I usually eat only about 1100 to 1200 calories but one day, it was only 900.