Even though things are a little topsy turvey at our place with DH suffering with cellulitis in his leg I was determined to make the most of it and have a pleasant, peaceful day. After getting the necessaries done for DH I headed outdoors where I truly love to be. This time I took my camera just in case I was able to get some photos of the beauty in our yard, namely, the horses. With DH laid up the chores have fallen on my shoulders but are they really chores when I can be a Horse Whisperer?? First stop was at the grain bin to divy up the grain, mineral and salt into 5 individual buckets and because horses are so smart and can actually eat the grain and leave the salt and mineral behind I had to dampen the grain with water so the mineral and salt would stick. Having finished that part of the job, I proceeded to the first pen where Rowdy was waiting and watching. 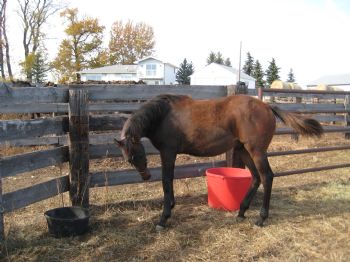 He was a little feisty after he ate half his grain and then he decided to run round and round his pen and then he settled into eating again. 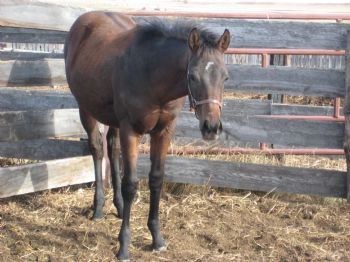 He backed himself into a corner but as soon as I took his picture he heard the click and came forward to see what I had in my hand, for all he knew it might be something good to eat, maybe even something different. Tomorrow I'll take a carrot our and see what he thinks about that flavour.

Glitter has a cut on her knee, who knows where or how she did it, all I know is it has to be treated. Now I DO NOT give needles to any animals so our neighbour who is also our trainer was summoned and over he came with antibiotics for her. While waiting for his arrival I took her over to the pumphouse and sprayed her leg with that cold well water to aid in taking down the swelling. She was ok with that for the most part. When she started moving around a lot I knew it was time to quit. No use pushing her past her limit. She is just as apt to get cranky as anyone else and it's best to keep on the good side so she is willing to have the whole thing done again tomorrow! 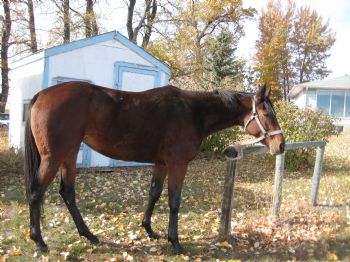 She was pretty anxious to get back to her pen with U Lift Me Off My Feet by this time but finally I managed to get a somewhat decent pic.