My Mom's request for her 60th Birthday was that I come home for the weekend and her & I drive me back to Indiana.

You have seen some pics about the weekend that led up to our departure but let me lay this out one more time.

Arrived in LAX at 7pm- Left out that Mom's BFF (since they were young teens mind you) Met us there to surprise Mom- HAPPY BIRTHDAY MOM!!

I loved seeing them so smiley 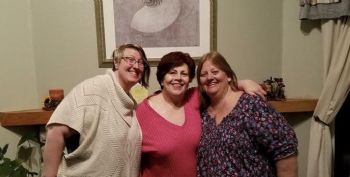 and why did I choose that to wear!
either way .. I love them both a ton!!! and I think we made Mom's birthday weekend super special!!

Now we were supposed to leave on Monday, we had it all planned! Drop off my husband at 8am.. Drop of Kristie at 2 and leave for our first destination, Laughlin, about 5pm. We set out to do this. about 45 min after we drop off my love he messages me to say his plane is delayed.. instead of 10am it is not until noon. I was like oh man! I am sorry baby!! Well... that continued ALL DAY!! That poor man was stuck at the air port for 12 hrs!! They did not get him on a plane until 8pm!!! So.. yeah that sucked!!! I felt HORRIBLE!
Now we get Kristie to the same air port.. on time at 2pm. We are headed to grab our first bite of food for the day.. and slowly moving through LA traffic when we get a call. Kristie telling us they canceled her flight home! So My husband actually.. eventually.. got to fly back to Indiana.. where we get snow A LOT! Kristie is canceled flying back to Texas because of Snow and Ice. How weirdly ironic is that!! We get turned around to pick her up. The whole time trying to figure out what to do! Mom is like we are leaving tonight, it doesn't matter we have to get you home!
So we go eat some amazing and horribly unhealthy food at The Black Bear Cafe.. mmm Chicken Fried Steak & Hash browns please! Eventually we made it home and loaded up the rental. We hit the road for Laughlin Nevada at about 8pm. Only you know.. 4-5 hrs later than planned!
We got there and checked in by 11pm.. grabbed a huge slice of pizza on the way to the room and crashed out!

So.. I should explain Farty Arty real quick. My husband is obsessed with Bulldogs, he loves them and his nickname is Bulldawg or dawg and has been since he was a kid. He told us that it would be cool if we just brought him a bulldog home. My Mom's chose an adorable stuffed bulldog that farts when you squeeze him. I picked him up and was like Arty! and thus he became known as Farty Arty! 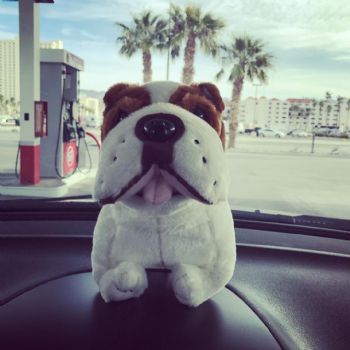 He is cute!
We also painted rocks over the weekend, writing on the back Mother/Daughter road trip & the date and such.. which we proceeded to leave at various stops during our drive! So I made sure to get pics of Farty Arty with our Rocks!
I am going to share a few of our faves!

Our first Selfie in Laughlin heading out.. 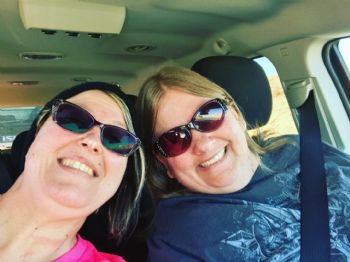 then I said no get out of the car! 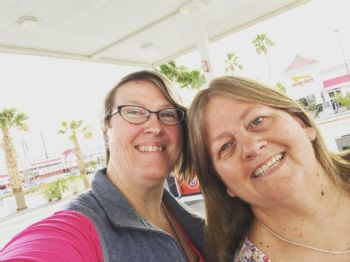 and see that little sign in the background?? Yup I absolutely had to get a burger from In -n-Out cause I had been craving one! 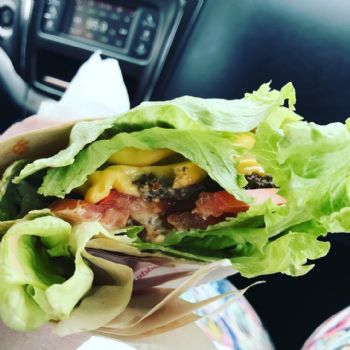 So off we went..
We stayed in Flaggstaff the next night and should note we went to Sedona and it was awesome, in fact, we each had a Tarot reading which.. wow did the woman nail me with absolutely NO INFORMATION given. I was impressed! and I drew an affirmation card.. which was: 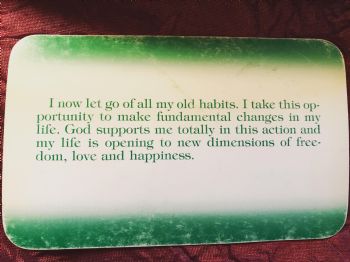 I needed to be reminded of this very much 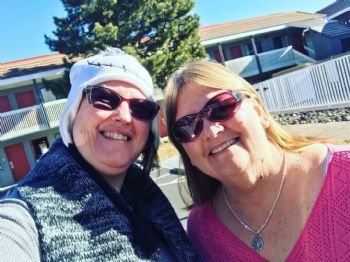 It was a cold morning when we left!! but selfies were required daily with my Mommy!! 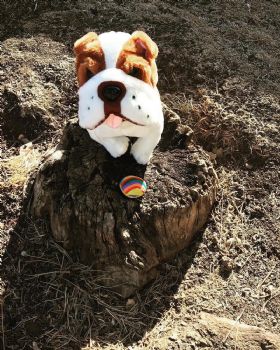 Farty Arty left A rock even!!

While leaving AZ we also detoured to Winslow! Why you ask?? We are both huge Eagles fans and we were totally gonna stand on the corner of Winslow AZ!! 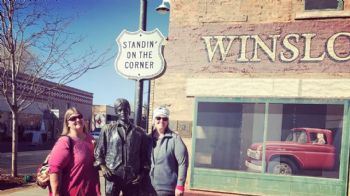 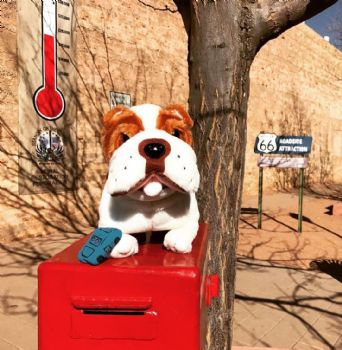 Farty Arty left is cool Rock designed Car there. If you EVER get to go do it. Tiny nothing town but the tribute is so cool!

We pushed to end the night in Amarillo Tx with plans to eat a huge steak and that meant the world famous The Big Texan Steak Ranch & Brewery! OMG the BEST steak ever! Seriously .. I will eat there again and have no regrets about that phat rib eye I had.. 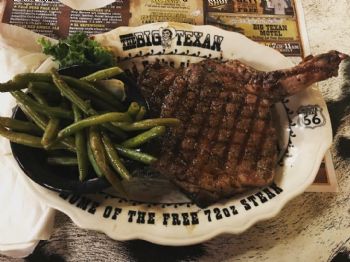 You are jealous.. it is ok! 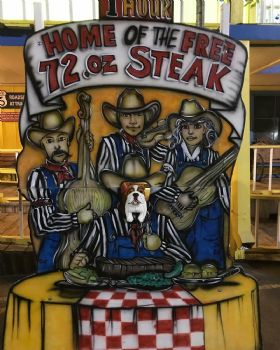 and Farty Arty Posed!! we also left our Rock on a porch swing! 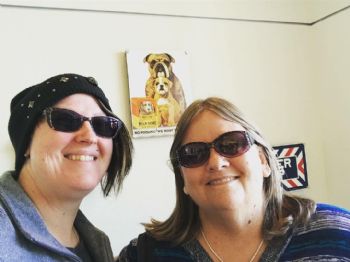 Rest stop selfie.. cause I could put a bulldog in the picture for my hubs haha..

Our next detour was because My Mom once took my grandparents on a road trip and during that road trip they stopped in Shamrock Texas. well.. They were having a parade and a road was closed and someone directed them down another street and they found themselves in the middle of the actual parade haha.. she said we just drove along waving at everyone because we pretty much were in it at that point!

It was a cute little town! 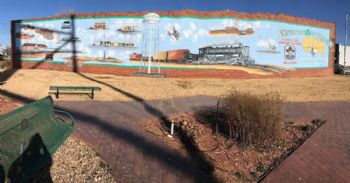 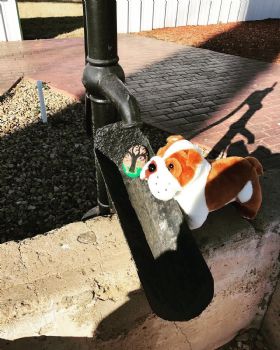 Farty Arty needed a drink .. but the Well was dry so he left a rock!

We continued on, and our final night stay was in Joplin. We met up at Downstream Casino & Resort with family.. family I had never met and Mom had not seen in many years! It was pretty awesome and we all failed at pics haha. I won a little again to balance what was spent (which is why I bought awesome groceries in the other post because the Universe knew I need it!). 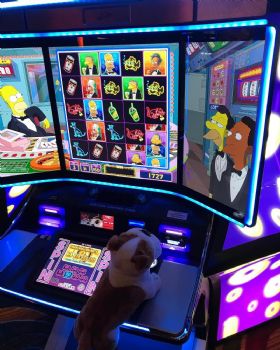 Farty Arty had to play the Simpson's!! Cause it is cool!!!

Just a block from the Casino is Three State Corners.. it was pretty cool to know right there we were standing in 3 different states!! 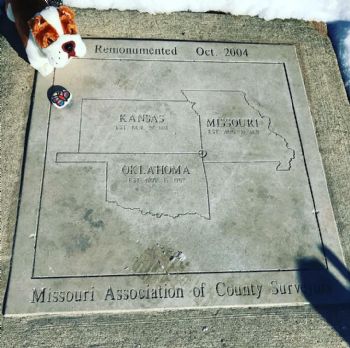 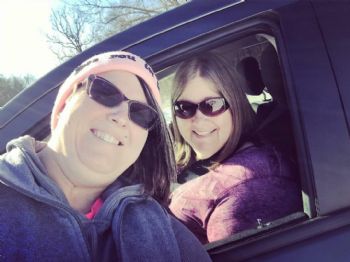 We selfied it and then hit the road for the final leg of the trip home!

We realized an upcoming Harley Store and Mom decided Farty Arty needed a bandanna. I have decided that Arty will have many more adventures and may have to start collecting pins!! 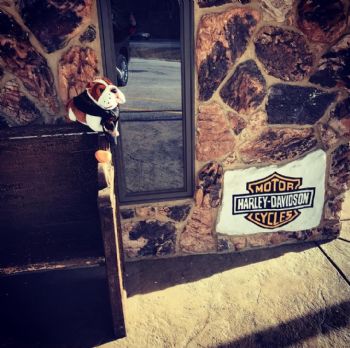 The trip was far too short and she was only at our house for the weekend. She left Monday morning and this is my last Selfie with her.. 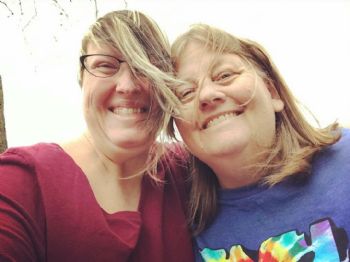 I love her more than she knows and miss her every second of the day. I love that we did this and plan to do it again!!
She is my Mom.. my hero.. my everything :)