To say the last few months have been a backslide would be an understatement. I'm poking around. Making no commitments. Figuring out what, exactly, I need for ME. I've reached out to a few of you, and thank you for your inputs.

Yesterday was the first day I was within my designated calorie range in a very long time. I woke up this morning thinking "I DID IT!" versus "oh for crying out loud I blew it AGAIN." That was a good feeling.

Our new rescue kitty had a very difficult life. A feral cat, who was abused and adopted, then thrown back out to a feral colony. We know a lot about her first adopter because the shelter knew him. The woman who had originally rescued her was moving out of state and took a little "victory tour" to gaze at all the feral colonies she had helped. Found our poor girl in below freezing weather, more messed up than the first time. She spent 2 years in the shelter, afraid.

We've had her a little over 3 months now. She refused to come out of her "safe room" for 2 of those months even if we left the door open. She hissed when frightened, but never scratched or bit. She is such a good girl. She has realized that Family Time on the couch is "safe." She eagerly waits on the couch for us to come snuggle in the evening before bed. She is still shy if we approach her in other areas of the house. But improving every day.

I've also been crafting. This is a photo of an afghan I made my sister.

I hope all of you are well. 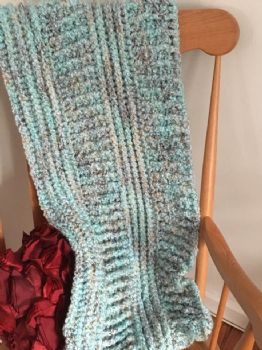 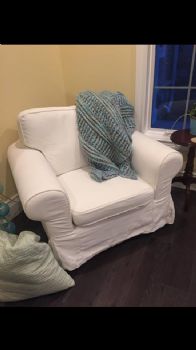