Love and Memories and the Kindness Challenge!

It's my first Mothers Day without my children. And yet, I feel as though they have been with me all day.

When I woke up this morning, I asked my girls spirits to be with me and get me through the day, to just give me a sign that I wasn't alone. Within a short time, my uncle arrived to "mow the lawn", which is code for checking on me.

I visited the cemetery, asking the girls again. By now, I was pretty sure that their spirits had conspired to make sure I would be okay this weekend. How? By making sure that all the kids they knew at school and Girl scouts showered me with love this weekend,as well as all of their parents.

On Saturday, the Girl Scouts had their bridging ceremony; part of it included a memorial to my daughters. Then the Girl Scouts presented a check to the mosque board, money they had raised to start the Sara and Sophia Rouin Memorial Playground, a check totaling $3,600. Considering that the troop only gets 90 cents for each box of cookies, this was a huge accomplishment. A couple of news channels were there, and interviewed some of the girls about the playground and how they were coping with the loss of their friends. A couple of the girls broke down in tears as they shared how much they missed the girls, but spoke eloquently about how working toward a memorial had helped them to heal.

Today I had a parade of visitors, all people making sure that I wasn't forgotten on Mothers day. I ran out of vases for all the flowers, tried vegan chocolate cake (not awful, but not rich enough), and had some ice cream, all gifts from friends and neighbors.

I had lots of conversation and lots of hugs. I told people of the latest challenges we are doing in memory of the girls.

(1) The 4th grade at the school making rubber band bracelets, which are being taken by aide workers to refugee camps all over the world as gifts for the children. Sophia and Sara had done the same through Girl Scouts, and were quite passionate about it. We have already heard from an aide worker who sent a video that the children in class watched, and opened a dialogue with some children at the school who emigrated from Afghanistan : they had all lived in refugee camps before coming here, and had not before believed that their American friends could understand their experiences. When they told about their lives, the children (especially, surprisingly, all the boys) showed a great deal of empathy.

(2) The Muslim holiday of Ramadan is coming, so the kids in Sara's class are helping me to make bag lunches for the homeless. Muslims fast during the days of the month of Ramadan, and usually break fast in huge gatherings (Iftars) of friends and family, to share thier food. Since my house, and budget, are so small, it had become the tradition in my family to make bag lunches and pass them out. My daughters would decorate the bags and help me to stuff them. This year, Sara'a class decorated bags and will help me to stuff the, and then I will deliver them with the help of some friends (premade pb&j sandwhiches, fruit, chips or crackers, dessert, and a water bottle or juice box, as well as a statement about the girls).

The class asked me to challenge others to do some good deeds in the girls names, so here goes! I hereby challenge people to make 10 bag lunches in the next month and give them out to any homeless people you see throughout your towns...either just a few per week or all at once. All I ask is that you provide nutritious food that isn't likely to go bad in the summer heat. If that's not affordable, maybe you can work in a food kitchen for a day, or just pass out water bottles and/or fruit. Just take the time to look at a homeless person and smile at them, and make them feel like they are seen. I guarantee, even though the intention is to do a good deed for them, you will walk away feeling a little better yourself.

I'm posting a few memories that came up in my Facebook timeline about my girls. I hope you enjoy, and are inspired to do some small act of kindness as a blessing to the girls. 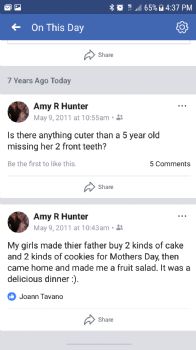 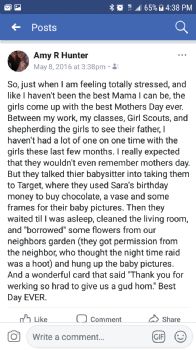 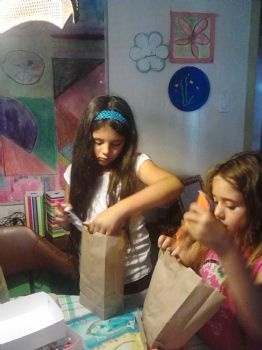