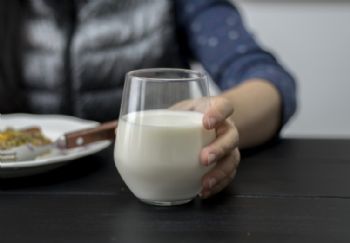 I found this article on Greatist, I really like oats and it peaked my interest so I thought I'd share

Is Oat Milk the New Almond Milk?
By Abbey Perreault

From this year's overnight oats craze to the rise of savory porridge, the humble oat has had a breakout year. Its most recent accomplishment? Becoming milk. Whether you’re vegan, dairy-free, or just love a good plant-based milk alternative, you’ve likely heard about the dairy-free milk that’s suddenly splashed onto the scene, finding its way into coffee shops and grocery stores across the country.

But before we put all our oats in one basket, there are a few things we ought to know before committing. Like, is it actually made out of oats? Can it be trusted in our coffee? And what would happen if you put oat milk... in your... oatmeal? We know you have questions. So we took a deep (metaphorical) dive into the world of oat milk to dig up the answers you deserve.
OK, so what is it?

Oat milk is a nut-free, dairy-free milk alternative made from strained oats. (Yep, the same kind you’ve been eating for breakfast.) How do oats become milk, you ask? The process is actually quite simple—and very DIY-able. Soak steel-cut or old-fashioned oats in water, blend until smooth, strain out the remaining solids, and drink up! You can keep the homemade stuff in the fridge for up to four days.
Why is it so popular?

OK, well, first of all, oats are so hot right now. Second, this milk is lower in fat than most dairy varieties and higher in protein than some of its other plant-based competitors like almond milk and coconut milk (though it's important to note that soy milk, pea protein milk, and dairy milk still come out on top for this one). And since the process keeps all of the soluble fiber intact, oat milk has one of the highest fiber contents of ALL the milks, including almond, coconut, and even cow's milk!

So if you’re looking for a milk alternative with a great taste and better texture that will keep you full for longer, this might just be the milk for you. Oat milk also is rich in beta-glucan, which can help keep cholesterol levels in check.

Nutritional benefits aside, oat milk is naturally creamy and sweet, and lots of people are reporting it’s the best-tasting milk alternative on the block.
Are there any downsides?

Though it’s got a lot going on for it nutritionally, oat milk tends to be higher in calories. One cup of this stuff has somewhere around 130—compared to almond milk and soy milk, which, unsweetened, even out at around 30 and 80 calories, respectively. In other words, if you’re cutting the cals, oat milk probably shouldn’t be your go-to beverage. Also, some brands can be insanely high in sugar, so be sure to check the nutrition label before adding it to everything you eat or drink. That being said, it's creamy and delicious, so when you're feeling up for it, go ahead and treat yourself.
Who should avoid it?

Don’t hop on the oat milk bandwagon if you’re a proper caveman or are on the keto diet, since oats are grains, and grains are, sadly, off-limits. Those who are looking for low-sugar options should be sure to check the label (it can vary from brand to brand) or make their own version at home. But if you’re vegetarian, vegan, gluten-free, and have nut allergies to boot, these oats are yours for the taking.
What should I use it for?

Obviously, it’s delicious enough to guzzle down a whole carton on its own. But we think oat milk also comes out on top in several contexts. Due to its rich texture, it’s starting to become the plant-based milk of choice when it comes to coffee. The heavier consistency makes it perfect for latte art, and adding it cold to any iced coffee or latte will give you a creaminess that goes even beyond whole milk. Since it’s on the sweeter side, it’s also great in smoothies and matcha lattes.
Where can I find it?

If you’re sold on this sweet nectar of the oat—and honestly, who isn’t?—scan your local grocery store or look online for Oatly, the Swedish brand that recently rose to fame in U.S. artisan coffee shops. Within the past year, it’s spread from being sold in just a few New York shops to more than 1,000 locations across the country. Oatly also offers low-fat, chocolate, and super-foamable barista varieties, so you can keep it light, drink it as a sweet snack, or froth it like there's no tomorrow.
Is it a good thing that it might be replacing almond milk?

Unless dietary restrictions prevent you from doing so, mix up your milks when you can. You’ve heard it before: Too much of anything can be bad—especially when it comes to the effects some food crazes can have on the environment.

As almond milk rose to worldwide domination popularity, drastically more land, water, and even bees were diverted to growing these nuts. (And it turns out almonds are really thirsty crops grown in a drought-prone area—80 percent of the world's supply is grown in California!) The amount of water diverted from rivers to grow almonds is so significant, the California king salmon population is now under threat. Oats, however, require just one-sixth of the water needed to grow almonds. So, though it might not be top of mind, thinking about switching to the oat life might actually be good for you—and for Mother Earth.
Share This Post With Others
Report Inappropriate Blog
Member Comments About This Blog Post