The Funny Thing About Plans Is That They Change 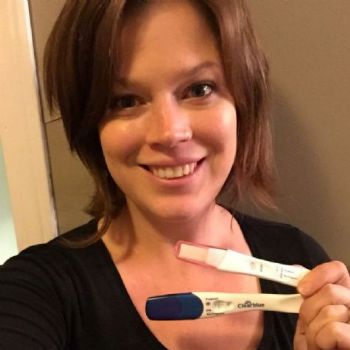 My weight loss goal is going to take a back seat.... because I am cooking up something else right now. Baby #3.

15 years ago my husband and I were told that I wouldn't be able to have children without a lot of help (because of cancer). We based a lot of our life choices as teens around that and held on to a future that two teenagers dreamt of and made it come true. 5 years after we were married we had our first child, a year and a half later we had our second. We had originally wanted a "big family" but after our second we had decided we were done at two. I had a really hard pregnancy and wrestled with post partum anxiety for over a year following her birth. The adjustment the second time around was really hard on me. We jokingly said months ago that if we had a third it would be a surprise. Our girls were planned to a "T" so there wasn't much "shock value" but we were excited none the less.

Saturday friends were joking about us having a third, "there is no way you guys can be done! You have to have more" (say the people who don't know the struggles- even though it was good intentioned). Then it hit me.

I am late. That test lit up before the cap went on. Talk about shock. I laughed so hard that tears streamed down my face.

The last few days have been a combo of emotions. All over the place but mostly really good and positive. Scared is a big one though- lots of life plans to change. But in ways we are getting to experience somethings we hadn't and fear and worry aren't stopping us. The universe and my hormone shift (from losing weight everything was off apparently) has us expecting the third child we hoped to have someday- when years ago having one was going to be rough. We tell our family on the 27th while our youngest opens her birthday presents; she turns two (I know they aren't on here so I am not worried about them finding out before then)

So! Fit pregnancy goals. Hoping to decrease fat in my thighs and hips and have an active and healthy pregnancy.
Share This Post With Others
Report Inappropriate Blog
Member Comments About This Blog Post