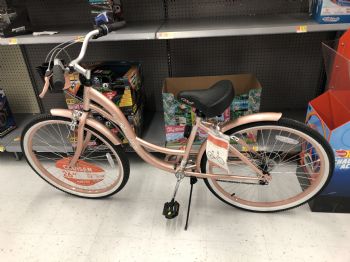 A couple years ago my husband said he wanted to get bikes one day and I was like yeah that’d be cool. But he’s been badgering me about it since. I got away without them last year because I gave birth in June so...no bike riding happening last summer. I mainly avoided it because I’ve got visuals of my fat body crushing a bike and flattening the tires. Also pretty sure I’ll look like an incredibly stupid large fat ball on a bike, what a sight.

We have 3 boys- they’re 5, 2 and 10months. So we luckily found a used bike trailer for $40. He then managed to convince me, even though we’re in the midst of building a house and needing money, to buy bikes. Nothing fancy. We went to Walmart and tried a couple out. All in all we spent just over $300 on 2 bikes, 3 helmets (the baby needed one) and the trailer. We still need a bike rack because we don’t live somewhere where we can just take off down the road, we’ll have to drive somewhere to go for a ride. We also will want a ride along bike for our oldest since eventually I’m sure he won’t ride as far as we’ll want to. But that probably is a while out. The bike is rated for riders 5’2”-5’10” and I’m 5’3”. It feels a bit big but to be honest we had a long day and all of the kids were melting down and for those of you who have been there you understand why I was just like “yeah whatever this ones fine.”

Still nervous about all this. Haven’t ridden since 8th grade. I definitely feel too fat to ride a bike and like I’m way above the weight capacity. Everyone’s so excited except me ...
Share This Post With Others
Report Inappropriate Blog
Member Comments About This Blog Post