The Surgeon Asked For My Why

Whenever you make a drastic decision to make a big change, there has to be a "why", whether it be a move or job change. The same comes with bariatric surgery.

One of the first things the surgeon asked me yesterday is "what is your why", "what brought you to this decision". Well, here is my why...

At the age of 29, I made the huge decision to go back to college full-time and finally finish my undergraduate degree, earning my BA in English from Purdue University just before my 32nd birthday. I chose to quit my full-time job as a licensed office-representative for a local insurance agent for a major insurance company to do this, and live on campus to complete this life goal. When I started, I was a size 8. When I finished, I was a size 14.

The thing about that was that I wasn't inactive, it was the lifestyle. I did make a couple of bad decisions, one was becoming a live-in caregiver, which made me have no freedom to get out to exercise or have the money to really eat healthy. I was stuck eating what my charge ate, which her diet was pretty unhealthy. Those were my 2nd and 3rd semesters on campus, and I wound up having a nervous breakdown due to it and gaining enough to be a size 10 up to a 12 at that point.

Even though the rest of my time on campus I spent walking to class or taking exercise classes for credit, my eating habits were seriously poor due to lack of funds (think ramen noodles and spaghetteos). But the fact that I did graduate is key.

The only thing was that I never fully recovered from gaining that weight. I did lose some of it just before my 40th birthday after moving to Minnesota for a year and making healthier choices while there, but I fell back into bad choices when I came back. In November 2014, I made the decision to join a group called The Onion Factory, where I wound up losing over 50 lbs by the beginning of 2015. By the end of 2016, I had gained it all back, plus some.

In October 2016, I had injured my back and was unable to exercise for two years until I found a chiropractor who specialized in my type of injury. Then I was finally able to move primarily pain free. However, by that point, I had reached 274 lbs. Going from room to room in my house would wear me out. I was feeling horrible. My depression was taking over and I was having difficulty keeping jobs due to anxiety and depression.

Finally, the anxiety and depression reached a boiling point in June 2019 and I was hospitalized for 7 days in a mental hospital. By the time I was released, I had reached my highest weight of 282. It wasn't until 8/9/2019 that I allowed a photo to be taken of me at Heart concert that it hit me that something had to be done.

My best friend had gastric sleeve surgery on her birthday in 2016 and has lost over 100 lbs so far, going from a 4x to a L in less than a year. If she could do it, so could I. I decided not to opt for the gastric sleeve, but for the Lap Band instead. The weight loss is slower, but more steady, and has a higher rate of people keeping the weight off. So, I made the phone call to go in for a seminar. Two days later, I went for my consultation and the whole process was started.

I need change, and I felt like this was my best option. I'm not cheating, I'm giving myself hope.

Photo from concert that pushed me to make the decision 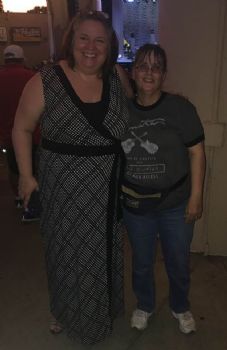