Today and every other day we must think of all those incredible, heroic men and women whom over the years have served as members of the military or as first responders - through wartime as well as peacetime! Their sacrifices - often giving that ultimate sacrifice of life and limb - have allowed us to have our freedoms.

They serve wherever needed in places of violence, conflict and danger. They serve in times of emergency situations caused by Mother Nature - floods, hurricanes - whatever is thrown at them.

They do this because it is their "JOB ". They leave friends and family behind sometimes for extended periods of time. They miss so much - births of children, school plays, birthdays, anniversaries, or other important events in our day to day lives.

Remembrance Day 2010 I posted this blog originally. Today I think we still need to remember to appreciate and THANK our heroes even more than I did 9 years ago. But we also must feel gratitude those in the education system who teach their students about the truths / horrors of wartime, of peace keeping situations, natural disasters, or the insanity of terrorism, etc. 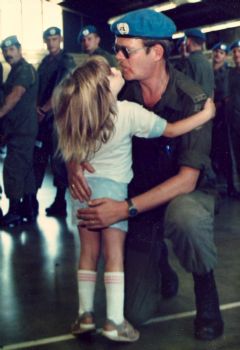 Aug / 1989 DH saying goodbye to our youngest, on his way to a 9 month tour of duty in Cyprus


When we were at our local Swiss Chalet a few weeks ago, they had flyers out about a special upcoming promotion they were planning for Remembrance Day. Any active or retired military who came into the restaurant today either in uniform, or wearing their medals would receive a free quarter chicken entree....

My daughter and I had pretty much forgotten all about it, but this afternoon my husband asked if we were still going to Swiss Chalet for dinner this evening.... He seemed pretty disappointed when I said that I hadn't planned on it, so eventually I said that if he really wanted to, then we would.

His response was an immediate and resounding YES!!! It made me feel badly for not realizing just how important being remembered for his service to our country is to him. He has a lot of health issues, and I think often feels he is somehow less of a man because there are so many different things that he is no longer able to do - things that both of our fathers were able to do pretty much until they died.

When he retired from active duty after nearly 28 years of service, he was required to turn in all uniforms, so when he got changed to go the restaurant this evening he had all of his medals pinned onto a nice dressy shirt - wearing them every bit as proudly as when they were affixed to his uniforms.

There were two other Vets there at the same time we were, both wearing Legion jackets with all their medals in full view. Both men were quite a bit older than my husband - having served in the Korean War, as well as WW II.

A young family with a boy about 7 or 8 years old, came in shortly before we were getting ready to leave, and he seemed to be watching both tables very intently. The other couples stopped at our table on their way out of the restaurant to exchange 'military' stories with my husband - where did you serve, what unit were you with, that sort of thing,,,,, This youngster came over to our table and waited quietly for one of the men to notice him. After a minute or so, he very quietly said 'Excuse me sir'. He stuck out his hand, and said 'Thank you for giving me my freedom' . He shook hands with both of the old Vets, started to walk away, then suddenly turned back to our table and approached my husband, shaking his hand and also saying 'Thank you for my freedom'.

All three of these men were obviously touched by the little fellow, and the older men said that it always makes them feel good to know that this new generation are being taught about the importance of the wars to our futures. They were all so pleased that they were being remembered for what they had done to protect the lifestyle we so often take for granted.

I looked over at my husband and was surprised to see that he had tears in his eyes. 'Nobody has ever thanked my like that before. I never thought what I did was important enough to be remembered' he said very quietly.

The Veterans of WWII, Korea, Viet Nam, and multiple other armed conflicts around the globe are aging rapidly. They need to be treated with Honour. They need to be taken care of wherever necessary in order to make their daily lives more liveable. They need to and must be REMEMBERED for all time. Without these wonderful men and women of the military, we would not have the many freedoms we all take as our 'God given' rights.

REMEMBER all of their sacrifices, so that they need never sacrifice for us again.

REMEMBER them with the love, honour, respect and thanks that they so deserve!!!!!

In the 30 years since the photo above was taken by a reporter for the local newspaper things have changed 'just a tad'..... our little one is now 35 years old, and DH no longer has his lovely dark hair or "slim, trim" shape - his forehead is much bigger these days, the hair is snow white, the tummy rather rotund.

He is 72 years old now, has more health issues and has really slowed down.

Once again tonight we celebrated Remembrance Day at a local restaurant with part of the family. This time it wasn't a stranger who talked to him about his service and medals, but our youngest grand. Once again he wore his medals proudly, and was thrilled to have her asking him what they were for. He was not so thrilled when she told our server that we were there to "Remember Granddad and all the other heroes who are 1000 years old just like him!!"