Trying To Find My Rhythm 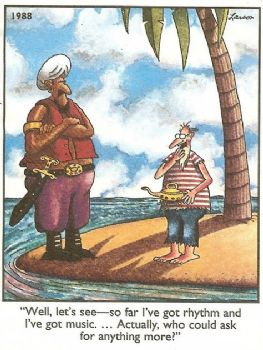 No wonder I could never spell rhythm, it doesn't have a second vowel. Learn something new every day, lol.

Happy New Year folks! How is 2020 treating you so far?

I'm also having trouble getting back to writing. I let everything stop me. I've had trouble with a couple different computers; I'm getting a new laptop on Tuesday and I'm hoping that one will be the charm. But my writing notes were always backed up, no reason any of that had to stop me. And my tumor diagnosis also stopped progress, but, again, it really should not have done so. I was never feeling poorly; they caught the tumor before I had any symptoms.

Last year I heard the term "executive dysfunction" for the first time. But not knowing the term hasn't stopped me from having it all my life. I'll only do one thing as a way of procrastinating about some other thing I should be doing. I'll make a list of priorities, and then not do them because I don't like anyone telling me what to do, lol. It isn't just chores and writing, it's also fun stuff. I'll intend to stream a series, but just aimlessly surf the internet instead. I'm 56 and set in my ways, but I'm trying to find some strategies to deal with this. I have to get used to the rhythm of writing every day, and get everything else back on schedule.

It's not all bad news. On some days, I take 2 walks instead of one. I'm drinking less sugary soda. Shirataki noodles are still my friend. Lately I've been eating them with veggies, meat, and teriyaki sauce.

And here's something fun, I just tried Rebel keto ice cream. Let it sit on the counter for 20 minutes to warm up, and it is the bomb! But be careful because it's only low carb, not low calorie at all, lol.