The Weight of Years

When I was 14 and in 9th grade, I met the "other Susan". It's how we refer to each other as we are both Susans. People who didn't know of us always thought we were using the editorial or regal "Susan". For most of the years since then we were inseparable. We used to laugh as people thought we were sisters, "Right, two girls named Susan." People used to tease us, "Yeah, the Susans are different - one drinks Scotch and Soda, one drinks Scotch and water; one has a dark blue Escort, one has a black Escort." And yes, we have been known to try and get into each others' cars by mistake. We have stopped speaking three times in our lives and each time, it has been over guys. The first time in high school, Susan had a boyfriend she told me she was sleeping with. Uh, it was naps but for our era and type of girl, this was huge. We made up at graduation.

This is us New Year's 1976. We said the next year could only be better and it wasn't. It was among the worst years of our lives. Susan became blind in one eye; I failed. 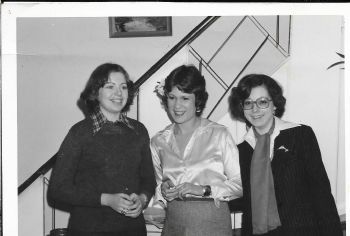 Next time was 5 years later - she started seeing a guy 4 years younger than us. I told her he was fine to play with but not to be with. She went to PR to live with him for business. I went for vacation. We reconnected and swore we would never do that again. We would be old ladies drinking tea at 50.
We always spoke several times a day. Once, I had to go to Europe on business and her manager inquired half facetiously, if she couldn't go with me. We finished each other's sentences. We could talk at the same time. No one ever understood that.
Fast forward to 2001. There was a reunion of the 70's classes for high school and a dinner the night before. I have/had high school issues. I wanted to wear a white leopard mini skirt to the dinner but hesitated. She was furious and sent me the quote about sharing your light. For all things high school, I have a tendency to revert to high school. So, if you knew/know me, you know that I am perfectly capable of pulling into the parking lot and pulling out. D knew this about me and arranged to take me. Now everyone knew of how close Susan and I were. After our 10th reunion, D sent us both cards telling us that each of us was the most beautiful girl at the party and he was MARRIED!! We laughed at him. D and I went to the dinner and the three of us hung out. The reunion the next night was a blast. I clearly disabused D of the notion that I had been his date. Picture of me with NOT D that night 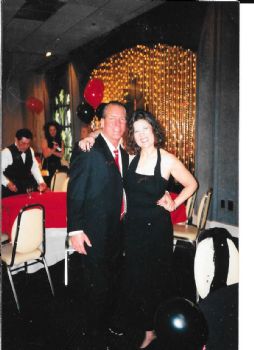 I had to leave for a week's business trip in LA the following day. D was up to his old tricks and pretty much sent us identical emails along the same lines. I still had no interest in him but she did. In fact, that summer I dated one of her old flames. However, somehow wires became crossed and she thought I wanted D. We started to become estranged. It hurt.
The last conversation I had with my father the night before he died was about how Susan wouldn't come to the door for her birthday. She didn't tell me when her mother died three years later. 50 came and we were not drinking tea together. I felt like part of my body was missing. Around 2 -3 years ago, we started reaching out to each other via FB and email. We both have ailments and infirmities.
Last week, she reached out with her phone number which was her original number. I have been very low so don't like to talk. I sent her my number yesterday and she rang immediately. Time disappeared. We spoke at the same time.
Here's the weight thing. Susan was always the tiny one. She was always a 6. I was 10-12-14. She always rubbed it in our faces. We could and would buy the same outfits but could never share. This picture in summer 2001 was a game changer for me. Yup, I have a tummy and am not ideal but Susan and A made me believe I was the biggest in the bunch. 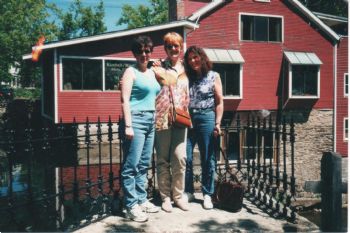 She's obviously no longer a 6 there and told me that men our age liked women with meat on their bones. I think NOT. I had seen photos online and thought she was getting bigger as I continued to get smaller. I changed the way I eat and live because of my condition. Mostly now, I weigh less than I did in high school. Okay, some of it I attribute to osteoporosis. I was stunned to find out she weighs almost 100 pounds more than me. This is not fat-shaming. This is a reflection and comment on our lives and perceptions,- how we see ourselves and how we see each other. The important thing is we are back and with great relief, talking at the same time. The years have melted. Over 50 years! I am grateful and blessed. Part of my body and soul have been returned.
Share This Post With Others
Report Inappropriate Blog
Member Comments About This Blog Post