California has taken a step back with it's opening due to increased numbers of COVID infections. This didn't surprise me much, as it followed the order to wear face masks. Given that I have been observing such inconsistent use of the masks and other (visible) measures, like distancing, more stringent rules were bound to come when the numbers continued to climb. I honestly think people believed that when things opened, they go back to "normal" behaviors. For me, that normal is long gone. I don't think I will be able to NOT think about close quarters in the future - being in crowds has never been my favorite anyway.

I was fortunate that I got one more swim in on Monday morning and then the Governor's roll back was announced during his noon address. Gyms were close immediately so those who had afternoon lane times didn't get to swim. I had a lane this morning, but rode my bike instead. Yesterday, my gym emailed us to say they are offering outdoor fitness, including lap swim, with a punch card. They have frozen membership costs, which is nice. So I think I will probably purchase one so I can at least swim a couple of times a week.

It has been hot here. Yesterday I had to spend LOTS of time at the DMV which is no one's idea of a good time, and it's less so with new requirements of distancing and mask wearing. I had my real id stolen before I even received it, and have been dealing with the fall- out ever since. I was able to renew my license but not change the number. Of course that requires more/different forms. So back I will go after I get those together.

Needless to say, I arrived home hot, sweaty and irritated...so jumped in the shower and ate dinner and was in bed by 7:45. I just couldn't even handle Netflix last night. Too much noise and people-ling when I was at the DMV.

Today's cycle was 11.7 miles around Lake Natoma, nice weather to get it done before 10 a.m. I've got 15 bean soup in the pressure cooker and will have another early night I suspect.
We just finished watching Marcella on Netflix which was really good and are watching Season 2 of Hanna. I also was able to borrow "Too much and never enough" by Mary Trump from the library as an audio book so I can listen while doing other things. I doubt most of what I hear will surprise me...

That's all for now, be safe and thanks for reading.
Oh and received my swag from my 100 mile challenge! 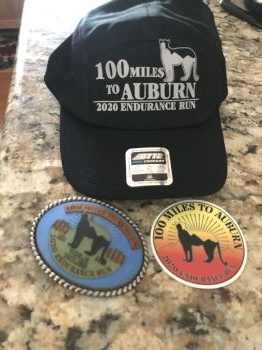