i have a garden, I mostly have flowers, but i do grow peppers and tomatoes, basil, chives, garlic and an occasional squash that gets there from the compost pile.

I mostly stick with the same tomatoes every year as I know their production. This year I tried something called a "midnight snack" tomato 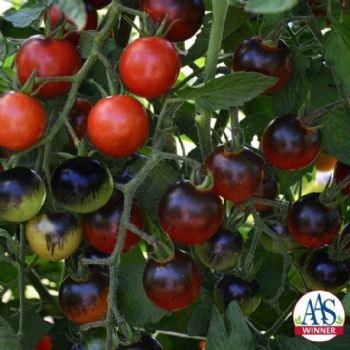 they are larger than cherry tomatoes and they are SOOOO good! plus early girls, german queens, and better boy. i came home from the hospital after getting routine tests done, no worries, and started to pick tomatoes. I'm usually out there every other day to pick some to keep up. I still had a lot from the last pick, but it was time and it is supposed to rain hard today and wanted to get ahead.

I take a basket out with me and I had to come back to the house and empty it, before I picked any more that is how much I got!! I love tomatoes. Tomato salad with onions and Ital dressing and a slice of italian bread YUMMM , tomato sandwich with mayo, or just fresh tomatoes with a little mayo on the side. 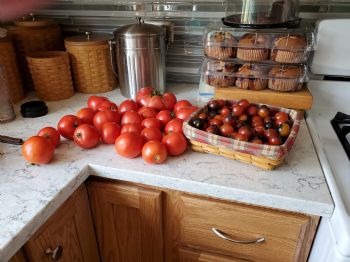 . the basket has all the midnight snack ones the others area a mix of all the rest. the big one in back is the german queen, the squirrels have eaten about 3-4 of them this season, HATE those squirrels! I blanched all of these to freeze and I still have this many left 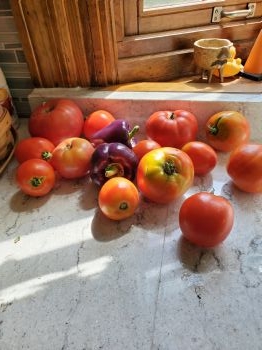 with some peppers in the mix also. they need another day or 2 and they will be so good!
will make Spaghetti sauce this weekend with some that are in the freezer and say those bad boys to eat!

how do you like to eat your tomatoes? the ones they have in the store DO NOT TASTE at all like home grown ones! The midnight snack will get eaten just as they are or in another salad had some last night so good!