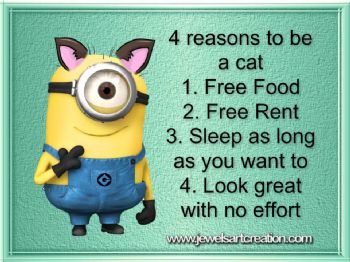 National Cat Day
National Cat Day is a time when people give their cats a little extra attention, and homeless cats are helped to find forever homes. Colleen Paige, founder of holidays such as National Dog Day, National Puppy Day, and National Pet Day, created the day to raise awareness about the number of homeless cats, and for those who live with cats to celebrate them.

Cats are the most popular pet in the United States, with over a third of households having them, and 90 million house cats living in the country. Domesticated cats are thought to have descended from the Middle Eastern wildcat, which is believed to have begun being domesticated about 12,000 years ago in the Middle East, near the Fertile Crescent. At that time, humans made the shift to agriculture from a nomadic hunter and gatherer lifestyle and started storing crops. The crops brought rodents like mice, and this naturally attracted cats from the wild. The cats were now in a close proximity to humans, and the more docile ones began being brought into homes.

Cats were later revered in Egypt and Rome, but lost favor in Europe during the Middle Ages, when they were associated with evil, and were often killed. They began to return to favor during the seventeenth century, and have continued to be a popular pet since. Still, it is believed four million cats go into shelters each year, while one to two million are euthanized, illustrating why the efforts to help cats on National Cat Day are important.

There are many ways to celebrate the day. The official website gives a list of 20 ways to celebrate, which includes ideas such as adopting a cat, supporting an animal shelter, and treating the cats in your life extra special. There is also a cat photo contest that can be entered into. Some other ideas for the day could be to look at some photos of famous people with their cats or read some quotes about cats.
cattime.com/life
style/1470-famous-quotes-a
bout-cats

Did You Know ~
They say St. Patrick drove the snakes out of Ireland. I wonder if he could do that for Congress.
Share This Post With Others
Report Inappropriate Blog
Member Comments About This Blog Post