The National Treasure hunt hit theaters in 2004. The first scene is set in 1974, where a grandfather (John Adams Gates) passes along the family lore to young Benjamin Franklin Gates. It was a dark & stormy night when the grandfather of his grandfather was given information about the Templar’s treasure. In 1832, Charles Carroll, the last living signer to the Declaration of Independence told Thomas Gates about the Templar’s horde & the Free Masons. The clues needed to find this treasure have been scattered or lost. All the Gates knew only "The secret lies with Charlotte.". Who or what that was, wasn’t clear. Thirty years later, Ben is all grown up & is a treasure hunter, historian, & cryptologist. Ben is leading team in the Arctic, following clues to find a ship frozen in the icy wasteland. Hey, they found it, maybe, but they needed the next clue. They had found the ship Charlotte , then a meerschaum pipe also called. Charlotte. Ben babbles about a written note cryptically. He comes up with the theory a map was written on the back of the Declaration of Independence - in invisible ink. The man in charge of the exposition is Ian. He & his band of miscreants decide they don’t need Ben & his computer geek friend Riley. Ian wanted to dump them, stuff happens & Ben & Riley are locked in the ship which was on fire. Fortunately, Ben knew the back way out, & they are out before the gunpowder blew the ship up. Ian & gang laugh as they drive off. 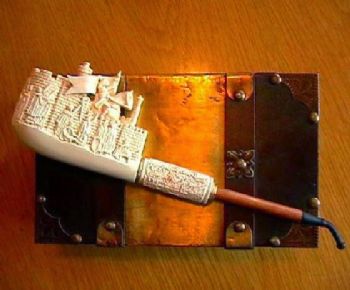 So, Ben & Jerry, oops, Riley, make it back to Washington, DC, they warned the FBI, Homeland security that someone is going to steal the Declaration of Independence. No one believed it - including Dr. Abigail Chase, of the National Archives. The Declaration of Independence is the best protected artifact -in a case, hermetically sealed, etc. To save it, Ben decides to steal first. They make trips to the display room, mockups of the archive room, etc. No way, even with Riley’s magic computer skill. To this, Ben quotes Thomas Edison: "I have not failed. I've just found 10,000 ways that won't work." Ben says you only need 1 right plan that works. 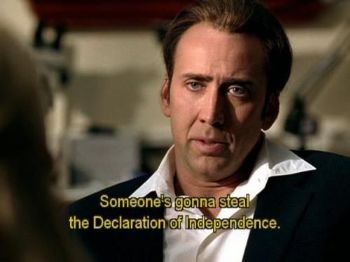 
The night of a big big gala, Ben gains access from. cloned worker’s ID, hets into the back area, strips off work overalls to see he is now wearing a tux. Everything is going well - Ben gets access to the multilayered protections (lifting & duplicating her fingertips, figures out her code was Valley Forge, etc.) Uh, oh, Ian’s team is also breaking into the vault. Fortunately, Ben had not at that time taken the document from it’s portable impenetrable case, cause the baddies shot @ Ben & the case saved him (document was OK, too. He escapes, bags a copy of the Declaration of Independence & makes it out. OMG! Ben is running to the van where Riley is waiting, Abigail sees him with the artifice roll up case, bad guys nearly catch him, Ben gives them the copy & they boogie off with Abigail. (Whew) Curses, foiled again! 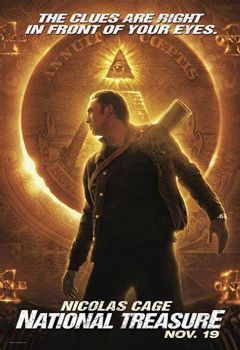 Yada, yada, yada, Ben gets to his dad’s home, Patrick Henry Gates. They actually make the invisible map visible. Now the alphabet teams (FBI & others) & Ian’s bully boys are after them? Abigail starts believing & helping Ben & Riley. They start a tour of the historic artifacts (Liberty Bell, this & that - Philadelphia, back to DC, closely followed by Ian’s team. They find a complex optical system made by Benjamin Franklin. They get caught, escapes, more near messes, found again. Somehow, they found themselves (aught by Ian again) underneath a tomb is an old church. There are rickety old ropes & splintery wood that they apparently have to move around on. Some of the ropes & wooden planks break & all of the players jump or are hauled to possible safety. 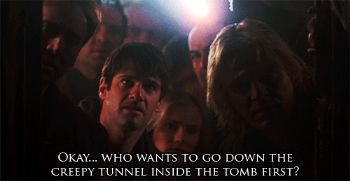 (OK, who wants to go down the creepy tunnel inside the tomb first?)

Ian abandons the Gates team (Ian kidnapped Ben’s dad). He starts burning ropes & wood. Brilliant Ben knows there’s a shaft the FreeMasons used to make the whole underground system. Hey, wait, what does this mark on the wall mean? Push it & go it. The REAL treasure is there. Ben cuts a deal with the FBI (for 1% of the estimated value of the hoard). The FBI catches IIan & the thugs. The last scene has Riley driving a sports car, & Ben & Abigail have a mansion. Yay! The treasure was divided among the best museum - so that “the people” owned the treasures. 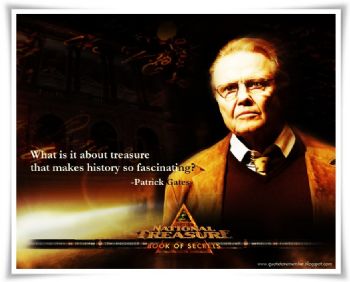 (What is it that treasure that makes history fascinating? Patrick Gates)


Treasure Hunters, not used in movie 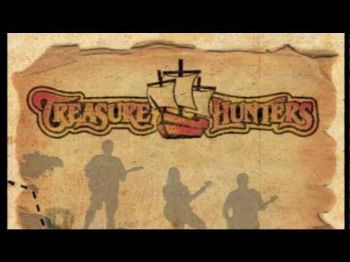 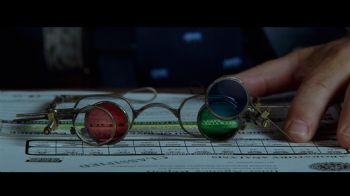 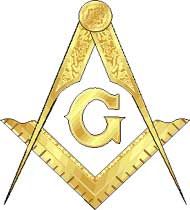 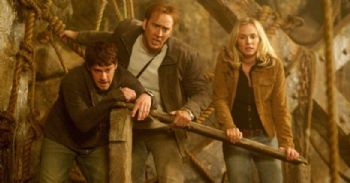 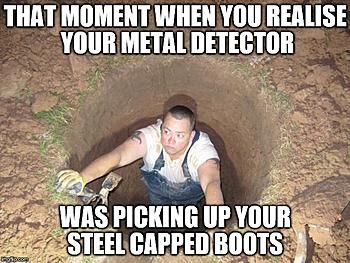