Halfway Through The Week

Well, it’s Tuesday, December 29, 2020. Halfway through the longest week of the year, that week between Christmas and New Year’s Day. At least the sun is shining today, even though it’s only 27 degrees. But all the snow is finally melted, leaving a small lake in our front yard.

It’s that time of year where we’re supposed to look over the past year, find the good, forget the bad and move on to the new year. New Year’s Eve has always been a nostalgic day for me, bringing back memories from my years when I still lived at home with my parents and my younger sister and two brothers. Back then I couldn’t wait to get out on my own, but now I wish I wouldn’t have been in such a big hurry. As a lot of us do, I only realized what I had left after being away so long. Both of my parents are gone now, my sister and I are no longer as close as we were, my one brother isn’t very family oriented and the other one moved a couple hours away two years ago. Things could’ve been a lot different if it wasn’t for the coronavirus. We may have spent Christmas Eve with my far away brother, since we used to spend it at his house when he lived close. At least my son and his family could’ve spent some time with us. But who knows. So Christmas Eve and Christmas was spent at home with my husband. How things change.

I won’t make any resolutions for the new year. There’s nothing I can promise myself that I haven’t already been doing. This year has made me realize who and what is important to me. My family, even though it isn’t ideal, we get along ok. My cousins are awesome people and I wish we spent as much time together now as we did when we were kids. My friends, although my oldest and best friend lives on the other side of the country, we still manage to stay close after 50 years. We were just kids when we became friends and I couldn’t ask for a better one. This will sound silly, but I am also grateful for my Facebook friends. I’ve met a few of them, in Jamaica on vacation of all places! But they are as close to me as my “real” friends. I am also thankful for my spark friends, two of whom I have also met.They provide unmatched support! I also have the best neighbors, and they have also become like family to me after living next to them for 28 years.

So, it’s halfway through this long, strange week and I feel adrift. The house is strangely quiet and unsettled. We unexpectedly lost our 12 year old cat Buster to lung cancer on December 7, 2020. That in itself is cause for another blog, but not until I’m ready. He deserves a great obituary and I intend to deliver one.

I hope the New Year brings more happiness than sorrow. This year has been so full of sadness and it’s almost too much for me to take. I know that the new year isn’t going to bring miracles, but can I hope for just a small one?

Happy New Year from my dad and two brothers, 1971 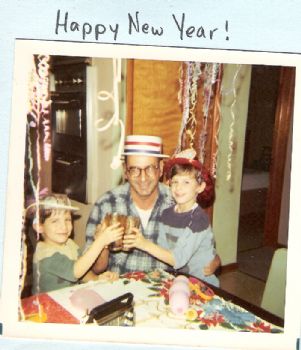