Pineapple? Don't mind if I do.

Amazingly enough, I did actually finish working out my 'meal plan' earlier in the week.  Even more amazing, I have pretty much stuck to it.  Which given planning anything these days is a mugs game, suggests I'm either exceedingly brave, or extremely foolhardy.  I'll leave you to ponder that - I couldn't possibly say.

One of the [numerous] things delivered with my shopping last week was a pineapple I'd ordered which was on special offer.  I like tinned pineapple well enough, but it doesn't have the tang fresh pineapple has.  But a good deal is only good if you use it. Plus given I have tinned pineapple in the cupboard, and fresh pineapple I'd previously frozen in the freezer, it would be doubly dumb if I didn't make good use of it. So obvs I have been making use of it. Natch I chomped on a slice as is because well, you've got to check the goods haven't you? 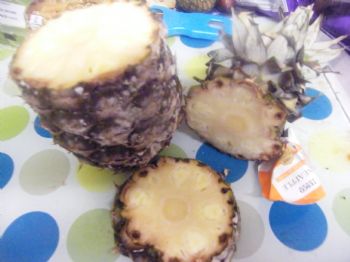 Wednesday I diced up a pork loin steak and stir fried it with some of the veg.  Onion, garlic, cabbage, pepper, carrot, etc. Made a sweet 'n' sour sauce to top it using some of the pineapple.  Actually quite a bit of pineapple really in terms of ratio to the rest of the ingredients.  The joy of cooking to suit one's own tastes eh? 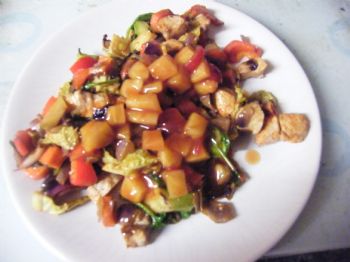 Yesterday I realised I had a bit of pastry skulking in the fridge that needed to be used.  Yes I know most people would bin excess pastry when they've finished whatever they were making with it, but I've been on a mission to waste NOTHING for quite some time now so couldn't possibly chuck it.  Instead I made a kind of pastry pizza with veggies, jalapenos, and lots of cheese.  Plus pineapple of course.  Because YES, YES, YES, pineapple absolutely works on pizza.  Cooked it in the combination microwave oven. 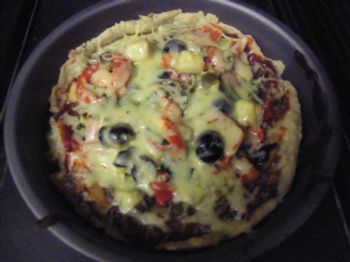 This evening I grilled a gammon steak, topped it with pineapple, served it with chips.  Plus some peas and sauteed mushrooms.  'Cos I could. 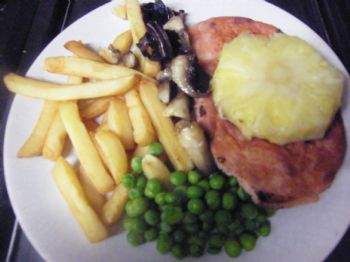 I haven't had gammon steak for years.  Who remembers Berni Inns and  Schooner Steakhouses?  Big thing in my late teens and no doubt we felt right dead propa grown up eating steak 'n' all in a restaurant, like real adults.   I would generally order gammon.  Choice of egg or pineapple to top it.  I always went with pineapple.  Maybe I thought that made me more elegant and soofistekatted like?

Anyhow I used the combination microwave oven again to cook the chips.  About which, I have to say, why does it take so much longer?  Granted oven chips ALWAYS take longer than they say on the packet - that's just a fact of life.  Yet everything takes longer in the combination microwave.  18 - 20 minutes at 220c the packet/recipe will say.  So you set your combi microwave and when it bleeps you trundle out to the kitchen in the happy expectation of your food being ready.  Except it's still pretty much raw.  Nothing wrong with raw food - generally called salad.  Or sushi.  Or Crudites.  All of which I love.  However,call me old fashioned if you wish, but, if it's meant to be cooked, I do actually want it to be cooked.  Makes no sense to me.  You'd think it being a smaller oven it would cook quicker really, like in smaller 'ordinary' ovens.  Apparently not though.

I 'spose I could write/phone/email the manufacturers but I'm already feeling a bit too much like one of those grumpy oldsters that used to write into local papers.  'Furious of Fulham', 'Angry of Accrington', 'Raging of Reading'.  Or in my case I guess - 'Wild in Wetlands'!  I figure I'll just double the cooking times when using the combi oven and leave it to others to baffle over the whys and wherefores. I'm far too busy thinking about the fate of the rest of the pineapple, and planning tomorrow's cook fest. Oops, there's that 'P' word again.