When a plan comes together

When the planets shift in the right way, and the stars align, when the wind blows in a certain direction, and The Fizzy Flu Furies are looking elsewhere, well maybe, just maybe, a plan you've made in these dark days might actually manage to come together.  As was the case with my 'cookfest' today. Yea it did happen. There was still pineapple to use so two more of my 'go to' dishes with pineapple; 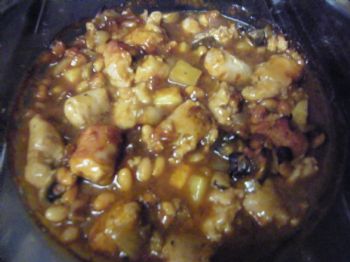 And Corned beef hash.  Btw a little tip if you use corned beef, put the tin in the fridge for a while before opening it.  Makes it so much easier to get the damn contents out.  I speak from the experience of many a cut finger/hand.  One time I sliced my thumb so badly I nearly fainted.  I was divorced by then and the children were asleep in bed so I had to wrap clean tea towels around it [having held it under the cold tap] and just hope. Luckily as it was on the knuckle, the scar doesn't show! 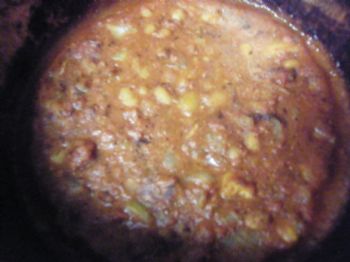 Also made a moussaka. 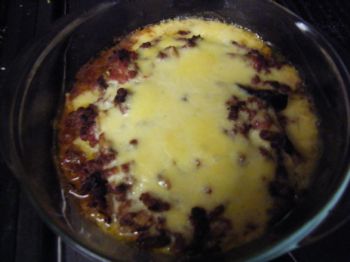 Plus some cauliflower cheese 'cos it would be rude not to while the oven was on anyway. 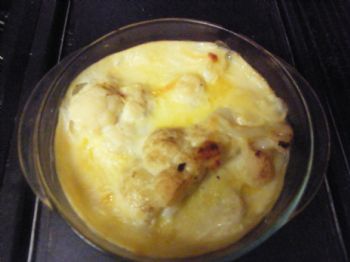 That's the next few days meals sorted out.  Of course being an awkward bugger I had an urge for sausage and mash this evening.  So, whilst I was steaming the cauliflower, I cooked up some potatoes to mash, plus steamed some cabbage.  Once the oven was on I slipped in a couple of sausages to bake.  The water the veg was cooked/steamed in made a nice gravy.  And well, it would have been silly to go to all that bother and not have some fried onions doncha think? 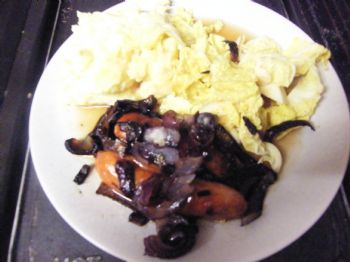 I may have *ahem* accidentally cooked too much potato and cabbage meaning  'bubble n' squeak' for breakfast.  Well a healthy variation of.  Zapped in the microwave with some added spinach and fresh tomatoes.  Topped with grated cheese.  There's still some of the fresh pineapple left as well.  Hmm.  In terms of fresh fruit, I've also got apples, plums, kiwi fruits, orange, and bananas.  Gazing into my crystal ball* I foresee at least two days where I'm not eating cereal for breakfast.

It suddenly occurred to me that when I did the batch cook at ThanksGiving, I asked you to guess which of the dishes I'd had for dinner that night and then never told you the answer.  Sacre Bleu!  However have you coped?  Shame on me.  Kitty was right.  It was the macaroni cheese.  What's more, her reasoning was spot on.  Out of the dishes I cooked, it was the thing we most associate with Americans and Thanksgiving Dinner.  Although one of the other dishes was a tuna pasta bake as I recall which I tend to associate with American cooking too.  Just not with a typical Thanks Giving Dinner.