As I'm sure you'll have sussed out, I'm trying to clear as many chores/jobs/tasks as possible before I go 'home' later this week.  So today has been mostly about dealing with outstanding correspondence and the like.  Phone calls and forms for the main part.  I didn't quite finish everything due to not being able to get through on the phone to the local Council to pay my Council Tax Bill.  I got my updated bill the other day and it tells me I can pay it monthly in cash.  I don't want to pay it monthly in CASH.  That would mean having to go to the Civic Centre every month to hand the dosh over.  Mind you, the Civic Centre is right on the front so it is kind of appealing.

Thing is though, that's not fair on people that don't live near the front, and aren't old enough to have a Freedom [bus] Pass.  Not everyone has a car you know.  Monthly payments are designed to help people on a low income that can't afford to pay upfront.  Not a lot of use if you then have to pay £5 odd every month just to get to the Civic Centre hmm?  Given I couldn't get through to them today, there may be alternatives I'm unaware of. I can't believe there wouldn't be other options provided by a Council that put up this official sign at my local park.  Shows they've got a sense of humour at least. 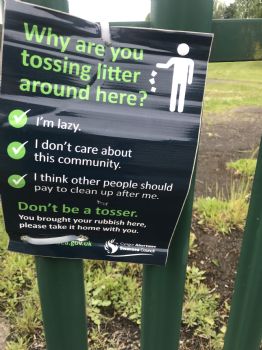 I took that photo a while or so back but it came to mind today because I passed it again.  Before getting really stuck into the various correspondence, I decided late morning to go for a quick twenty minute walk.  My plan was to take a further walk later in the day.  Hence I put my knee braces on, but not the back brace.  Off I set, walking along by the park [where the sign is].  It was a lovely warm day.  Hot even by Wetland standards.  I'm one of those weird people that are energised by the sun and heat.  'I'll walk to the Co op and back.  That will be going on for forty minutes.  The more I do now, the less I'll have to do later,' I decided.  So I carried on to the Co op.  Except it's not the Co op anymore.  It's now a local convenience store.  No matter - I never bought anything there anyway.   Then I remembered a walk I took a few weeks ago.

I know google had told me my suppositions were correct, but I wanted to check it out in reality.  Plus figure out the time it would take etc.  I carried on until I reached the place that I'd been at in the previous walk.  Took the turn off I'd followed then back to the main road I'd previously followed on that occasion.  Then headed directly back to Base Camp.  An hour and ten minutes in all.  Rather than the twenty minutes I'd planned.  The last five or ten minutes, my left knee and hip were starting to ache, and my lower back was stiffening up.

But The Body was communicating with me.  It was telling me 'I know you're fed up with me still weighing far more than you wish, but look how much stronger I am now compared to January.  How much more I can do without pain'.  Which frankly is far more important than getting back into skinny jeans and the like.

Once back at Base Camp, I refreshed myself with a cup of tea and got really stuck in to the aforementioned correspondence.  All the while keeping an eye on the tennis from Queens.  Well until Andy Murray stepped on court.  At which point sod everything else, I was TOTALLY focused on the match.  It was so GOOD to see him back competing again.  Jeez I've missed him and really hope he can get back again.  I reckon his post match interview communicated his feelings too.

Rounded my day off in a pleasant way by sending some emails to friends.  Including Spark Friends.  If you sent me your email and haven't received a reply from me, let me know please so we can sort it pronto.  Don't want to lose ANY of you.

Btw I'm now also checking out My Fitness Pal. If you want to find me there, it's the usual name - Tizslim. I'll decide later which [if any] to continue using.